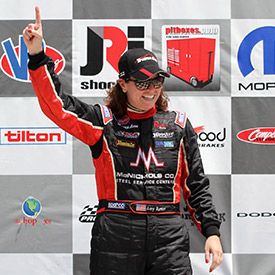 Amy Ruman, a two-time Trans Am Series Champion and driver of the No. 23 McNICHOLS CO. sponsored Chevrolet Corvette, is the granddaughter of McNICHOLS CO. Founder Bob McNichols. She drives professionally for the Ruman Racing team in the national road racing Trans Am Series.

Off the Track – Born on January 30, 1974, Amy currently resides in Stow, OH and is the former Owner and Vice President of Cenweld Corp. Truck Bodies and Equipment, a family owned and operated business from 1964-2012. She also is a former Stow-Munroe Falls High school Field Hockey coach where she coached for 9 seasons. She enjoyed being involved with the teens in her community and loved to teach the competition that drives her, always striving to involve young women in competitive sports. Amy is a 1996 graduate of Kent State University, earning her B.B.A. degree in Business Management with a Marketing minor.

You can learn more about the Ruman Racing team on their website.